In Which I Visit a Sideshow and Find Myself Onstage 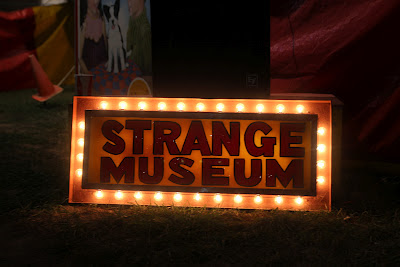 Being a kid who was attracted to the unusual, the disturbing, the alien, and otherness, I always wanted to visit a sideshow, but I was discouraged from it by my folks and, later, friends. Mostly on the grounds that it was a rip-off. But, finally, at my advanced age of *ahem*, I decided that I am at last the mistress of my own purse and psyche and shelled out the two bucks for a peek inside. 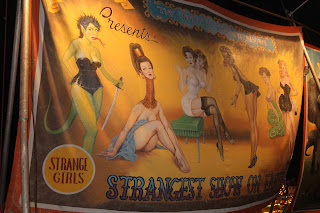 What did I see? Hey, that wouldn't be fair, now would it? Carnival sideshows are supposed to remain a mystery. You'll just have to find out for yourself, or forever wonder. I will tell you that, had I been ten years old, I would have been delighted. At thirteen, I would have been grossed out. At thirty, probably scornful. As I'm back at the delightable age, I was pretty entertained. If you want a hint about what it's like, let's just say that taxidermy is apparently a very important art form in the carnival world. And, sometimes, things get misspelled. As in Chupacabra for capybara.


Now to tell you about my real adventure...Pinckney, the kids, and I were visiting Illinois' DuQuoin State Fair when I stumbled upon a sideshow called the Strange Museum. Okay, stumbled upon isn't quite the best phrase. They had quite a big, gorgeous tent surrounded by colorful, fascinating images. Of course, it would be a stretch to connect what was on the pictures to what was going on inside. No matter. Did my husband and kids join me in paying the $2 to get into the show? No. The kids had wandered off and Pinckney had no interest. I think the notion made him too sad. I understood.

One of the best parts: As I paid my two bucks, the woman said, "Hurry in. The show's about to start." After swooning slightly, I went in alone and found myself surrounded by teenagers--high school boys with girlfriends, mostly. I felt very old. Slightly superior, but, still, old.

"The show" was in the back of the tent. I was intrigued. A most miraculous woman stood onstage, chatting with the crowd. Here's a quote from one of the photo cards she later gave me:


Tattoed from head to toe. Over 50 hours of ink by Katzen the Tigress. Tattoos include large cat girl portraits and a very large leopard on her back. Ears pointed. Subdermal implants. Tongue split. Magnetic implants.

The show had already started. While keeping up a playful rapport the teenage crowd, Katya was doing interesting things with electricity and light bulbs. Then she started eating fire. Now *that* was cool. She went about it very deftly. I meant to ask her later how it was done, but I was...distracted.

Her last illusion involved a long, coffin-like box, and blades. Many blades. "Who is brave enough to get into the box? You?" She pointed to a teenage girl, who squealed and hid behind the guy holding her hand. Lots of girls squealed. It cracked me up. A teenage boy volunteered, but Katya said it was better if a girl or child under 5' 7" participated. No one stepped forward.

You know what comes next, don't you? Some crazy, fifty year-old woman who had no business getting in anybody's box raised her hand. "I will!"

People stared. At me. I was positively giddy as I walked through the crowd. I felt like I was being crowned prom queen. No, seriously. It was like I was having a psychotic, surreal episode. I floated onto the stage. Was there applause? I heard it, but I suspect it was only in my head.

After an embarrassing few moments during which there was much discussion about where to put my purse (of course there was), Katya flung open the coffin/box, and I climbed inside. She asked the crowd to talk amongst themselves while she gave me instructions.

No! I can't tell you what instructions she gave me. That wouldn't be fair, now, would it?

Let's just say that there's a reason that children and slender young women are best-suited for the box. It is NOT made for fifty year-old women who have recently put on a few perimenopausal pounds. Nope.

Katya shut up the box, and the blades began raining down upon me. I could hear Katya talking to the crowd. I even threw in a few squeals and mewls for dramatic effect. The blades kept coming. She had me stick my hand out of the top of the box. I waved it. She had me hold onto the handle of one of the blades. I started perspiring. I suddenly realized that I WAS IN A FREAKING COFFIN. My heart started beating faster--yeah, that doesn't happen just in fiction. I had a brief, terrifying fantasy about there being a natural disaster or armed attack while I was there in the box. I would be left there, unable to free myself. Pinckney was waiting outside, and he had no idea what I was doing. If the crowd and Katya fled, he would think I went with them. He wouldn't know I was in the box. I would die in there--probably of terror. The final, horrifying act in the show.

"I guess," I said. I was such a liar. My panic was trumped by my desire to follow through with what I'd gotten myself into. I didn't want to let her down. Plus, this was my big star turn!

In my pocket, my phone vibrated.

Katya invited the crowd to pay a dollar to come up and look inside the box to see how it was done. When I heard that, I nearly screamed. I knew I had about thirty more seconds left in my mental reserve before I would lose my mind. Seriously. I thought I was going to die.

One guy stomped onto the stage. "Hey, that looks pretty tight in there," he said, leaning down, looking at me. I couldn't see his face for reasons I can't share.

"It is," I said. (If I were a different sort of writer it would've been, "It is," I whined in fear.") I took heart because, if at least one person had paid, I would be out soon. Maybe.

The guy left the stage.

I wanted to take those blades she'd put in and fling them back out. But I couldn't. It can't be done from inside the box. No, it cannot be done. At least not by a panicking middle-aged woman who is about to lose her mind.

When Katya started taking the blades out, I almost wept. I went from panic to elation in about three seconds. I would live, dear Reader.

She opened the box. "Sorry about your hair," she said.

My hair? Who was thinking about hair? Not I. I was flush with triumph, and ready for my return to the crowd. But the crowd--which had been about 15 people strong--was...gone. The only other person left in the tent was a guy who worked there.

All I could do was laugh. It was as though the whole thing had never happened at all. I'd never been in the box, had never walked through the crowd toward my glorious moment onstage.

Katya was very nice, and seemed surprised when I told her that I'd always wanted to be sawed apart in a box. She asked if I wanted to stay around for the next show, God bless her.

Since there was no one in the tent, I asked if I could run out and get my camera from my husband who was waiting, and she said "sure." Pinckney, who had had no idea of my adventure had apparently been the one texting me, ready to leave the fair. I gushed something about being in the box, grabbed the camera, and went back inside to take pics.

Katya is an artist, illusionist, and very interesting person. I wish I could've spent more time talking to her. In my haste, I wasn't able to get many good photos, but I do like this one of her very much.

Thank you, Katya! It was a thrill. Really and truly a thrill. 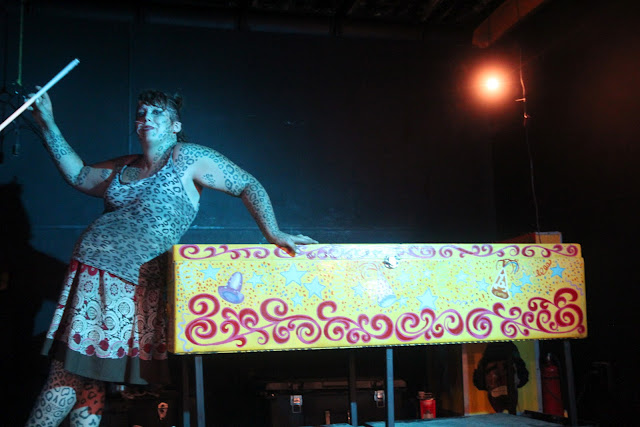 Read more about my state fair adventures at my bestie Maggie Caldwell's blog, Life In A Skillet. There, I talk about the food, amazing food.

Learn more about Katya at SomethingDangerous.com

Posted by Laura Benedict at 3:35 PM

In my twenties, I went to a sideshow with somefriend. The most striking part was how cynically the entertainers worked at making you feel cheated (more money for every silly display), and at making the audience feel like they were the freaks. A creepy but illuminating experience. Most sad was the doddering little midget whose claim to fame was having been a Munchkin in the Wizard of Oz.