Review: Mrs. Darcy versus the Aliens 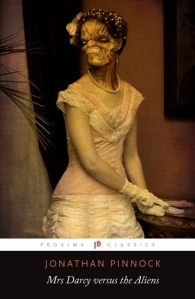 A while ago (too long ago, in fact), I received a review copy of Mrs. Darcy versus the Aliens, Jonathan Pinnock's alien homage to Jane Austen's Pride and Prejudice.

Reader, I read it, and loved it.

I confess I have never been on the classic-novels-morphing-into-contemporary-schtick literary bandwagon. Such romps are not generally to my taste. But if they all demonstrate the wit and good humor of this sweet little novel, I'm surely missing something.

Jane Austen's Regency England is plagued by mysterious deaths and disappearances. Nasty, tentacled creatures emerge from dark places and people are routinely probed by (ew!) and implanted with the creatures. The occurrences aren't yet common--only a select few like the ostensibly wicked Mr. Wickham  know that aliens are bent on taking over the planet. Mrs. Darcy (formerly Elizabeth Bennet) has been married to her beloved Fitzwilliam Darcy for a year, but has yet to produce an heir for him. Darcy is his priggish self, and Mrs. Darcy likes to have sex with him when his shirt is soaking wet. (A delicious nod to Colin Firth's sexy, sodden, star turn in the 1995 miniseries version of the story.) But Mr. Wickham and his fellow warriors are convinced that Mrs. Darcy's involvement is crucial to the defeat of the aliens.

I would go on, but the plot is beside the point.

One of the true pleasures of the book is the fascinating way author Jonathan Pinnock weaves references to Austen's work together with nods to popular culture. It's obvious that he knows her work very well (or at least well enough to successfully riff on it), and has affection for his characters.

Jane Austen herself makes a brief appearance as a writer of bestselling zombie fiction. There are boots in the novel called Bonham-Carters. Elizabeth's clueless sister, Jane, and Jane's husband, Bingley, who are charmingly dim in Pride and Prejudice, are just too plain stupid to live. Best of all, the characters you really love to hate in Austen's novel, are the most loathsome characters in Pinnock's novel. (Yes, Mr. Collins is ever a toad.) I would love to go on and clue you in further to Pinnock's various alternate histories and random, diverting silliness, but you really should get your own copy. Honestly, I was left still laughing when I finished this novel, and I don't have one grumpy thing to say about it.

We all need something light and slimy from time to time. How refreshing!

**You can read reviews on Amazon UK. There is limited availability in the US.
Posted by Laura Benedict at 11:54 PM