A Dreadful Valentine, Two Contests and a Happy Ending

Did anyone else have a terrible Valentine's Day?

P was out of town and the children were doing a school fundraiser, so I found myself alone with the dogs, a whole lot of laundry, a bit of leftover chicken and no dark chocolate. Yes, I was feeling very sorry for myself! P did make sure a lovely bouquet arrived early in the day, but I had to spend a good deal of time clearing piles of paper off the kitchen island before it looked at home there.

I worked for a while, but, truly, my heart wasn't in it. I found myself watching a perfectly dreadful film--Divorce, American Style--while Scout (our young Fauxberman or Fraudweiler, whatever his black and brown markings represent) attempted to place his latest obsession, a jingling rubber ball, on my lap so I could absentmindedly throw it across the room for him. His head only just reaches the couch cushion, so he didn't often succeed, poor thing.

So much for the whole "if you don't have someone to do something for you on Valentine's Day, do something for yourself" thing! I'm terrible at such activities. Bubble baths? Hate them. I have the same love/hate relationships with tubs that I have with feet. Read a good book? *sigh* I've read piles. Take yourself to a movie! Um, on Valentine's Day? Really? At night? Alone? And have you looked at what's playing at the cinema recently? (Do I sound bitter?)

Divorce, American Style was, I learned from the TCM talking head, released at the height of Dick Van Dyke's popularity. He stars with Debbie Reynolds--a kind of woozy, non-manic Debbie Reynolds that I'd never seen before--as a man who divorces his wife and then ends up coming back to her after a year. Why he returns, I'm not sure. The film's portrayal of marriage is grisly, and right in line with other films of that era: marriage is a trap, they seem to say. It's hell, and there's no escaping it. If you're not of a certain age, you won't know about Plaza Suite and The Secret Life of an American Wife, or Who's Afraid of Virginia Woolf, the mother of all marriage-is-hell films. The films are all supposedly about exposing the hypocrisy of the American middle class, I believe. But mostly they are just tense and cruel. Just the thing for a solitary Valentine's Day!

It was actually only the second worst Valentine's Day of my life, the first being the day after my second wedding. In hindsight, I can see that we were doomed from the beginning: there was a cold, wet rain during the ceremony, the guy doing the music forgot to dim the lights and started the song for our first dance before we knew what he was doing so that we were only able to dance to it for about a minute, and several of the guests stole bottles of wine and liquor from the country club's bar. Worse, though, was Valentine's Day, our first day in Cancun. Our room wasn't to be ready for hours, and we sat there on the beach all afternoon in our dark, wool clothes, perspiring and miserable, wondering what we were doing there. At least I was wondering. Then I was sick for two days. Ah, memories....

So, back to this Valentine's Day--I spent Saturday morning doing damage control on my very first newsletter. I was thrilled to be able to send out a newsletter. My html skills are minimal, and it took me weeks to put it together. But I messed it up--and I even had two contests in it! 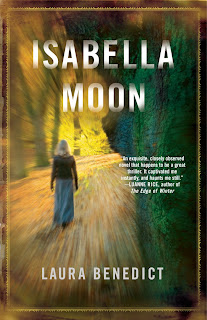 I mentioned here a while back that the trade paperback of ISABELLA MOON was picked up for Target's Bookmarked promotion beginning February 15th. So to encourage everyone to go to Target and buy the book, I said that I would send magnets to anyone who took a picture of it there and emailed the image to me so I could post it. I thought it was a great idea! That is, until an alert reader/Target employee emailed to tell me that people aren't allowed to take pictures inside Target! Ack! I can just imagine twenty potential IM readers being dragged off to scary little rooms in handcuffs. So I had to email everyone on my newsletter list to tell them to STOP!!!!

The magnet offer is still on, though. All you have to do is go to see ISABELLA MOON at Target and tell me you saw it there. Then I'll send you magnets. (If you really want to make me happy, you can buy a copy there for your mom, dad, sister, BFF, nanny, but I hate to ask!) I'll also put you in a drawing for IM goodies later in March.

If you drop me an email at laura@laurabenedict.com, provide your name and email address and a request to be added to my newsletter list (I'll only send it out quarterly.), I'll put you in a drawing for a fabulous gift basket. Let's see. It has a signed copy of CMLH, a pillar candle, a fancy bookmark, a magnetic poetry kit for leaving messages for your secret love, gourmet tea, a very cozy throw for cuddling, and a box of Godiva Chocolates. Also, a $25 Victoria's Secret gift card. Just send me that request by The Ides of March!

Oh, and full disclosure....I actually opened the box of Godiva I bought for that basket today because, well, a girl needs chocolate when she's had a sucky Valentine's Day, doesn't she?! I'll buy a fresh one before I mail out the basket. Promise!

Posted by Laura Benedict at 6:00 AM

I'm so glad you're home safe! Valentine's Day is hard, especially when one's beloved is far away (I've spent plenty of those and they suck!). I know the slate of movies you mention -- they are interesting cultural icons about the time, I think, and I wonder what people will remember from these days about marriage. I love Who's Afraid, just because it looks like Richard B. and Liz are having so much fun. (in that weird disturbed way) Now that was a marriage! Two in fact -- if you marry the same person twice, you know you're in the ring of fire love. Love the description of being in paradise dressed in the wrong clothes. Perfect metaphor for lots of things. God, I've been there too!

"the ring of fire love" Love that.

So many of our opinions about the world are shaped by the books we've read and the films we've seen. Several people have told me that the images of the sixties they've seen had nothing to do with their personal realities. It's a good reminder, I think, that art is reality re-shaped--not necessarily reflected.

One son is being divorced, he got the news a few days before Valentines and the other didn't buy his wife a bon bon...they are both too young to be imitating my "romance is irritating" attitude.


"So many of our opinions about the world are shaped by the books we've read and the films we've seen." *sigh*