Today I want to introduce you to the mysterious Clair Lamb--well, that's the name I know her by anyway. She's also known as Answer Girl, here. Or here, which is where I met her a couple of years ago. When I asked her how I should describe what she does to get along in the world, Clair gave me a list: writing, researching, editing, stage management, and babysitting. Somehow, though, I think her list is far too modest. I know I can't keep up with her! Because she's made herself indispensible in the mystery world, tomorrow she's off to Bouchercon 2008 in Baltimore.

(It occurs to me that everyone who visits the Handbasket might not be familiar with Bouchercon, the annual mystery and crime fiction convention named for this man. With apologies to Clair for the wikipedia link--I know wikipedia's not an actual research site! If you're going to Bouchercon and you see Clair there, give her a big hug for me since I have to stay home.) 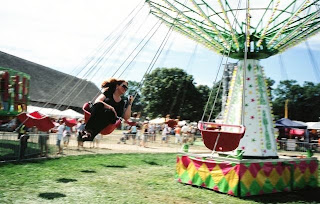 Bouchercon starts tomorrow, and I need to get some business cards printed. It’s been a few years since I did this, and it’s been more stressful than I expected – in much the same way, I realize, that I put off shopping for new clothes to avoid the realization that my clothing size has changed.

First, the easy part: my name. Daughter of the South, I have a name that originally belonged to my mother. To avoid two Ellens, the family calls me Clair, but I refuse to put E. Clair Lamb on anything. Therefore, I go with all three barrels: Ellen, Clair, Lamb.

Then, the first challenge: a title. The standard business card doesn’t have enough room, and anyway, which one would I choose? I am a copywriter; I am a researcher; I am an editor. I am also president of my local community theater group, a literacy tutor, and most recently the production stage manager of a show in the New York Musical Festival. I run a website for a bestselling author, and I read scripts in development for a film and television production company. A friend has suggested “Font of All Wisdom,” but that seems a little presumptuous (and maybe even sacrilegious – I seem to remember that being one of the attributes of the Blessed Virgin Mary). So no title.

On to the next: my address. I have two, a P.O. Box and a street address. I prefer to use the P.O. Box, as I travel a lot and my street address is not weatherproof -- but people want to send me things by UPS and Federal Express, and they don’t deliver to P.O. Boxes. If I use both addresses, that will confuse and annoy my local postmaster, on whose goodwill I depend. I go with the P. O. Box, since I’m just as glad not to give out my home address.

Harder still: the phone number. I have a landline and a cell phone. The cell phone is the one reliable way to reach me, but I hate to give it out; I’ve had clients call me at 10:00 a.m. on the Sunday of a holiday weekend. I know it’s my choice about whether to answer the phone, but really – can you ignore a ringing telephone? Then again, I’m not always good about checking messages on the landline when I travel. Thus, the cell phone – for now. Fax number? I do have one, albeit it an electronic one – but when was the last time anyone faxed me anything? Executive decision: no fax number. People can ask if they need it.

URL? I do have a website, embarrassingly out of date: the cobbler’s children go shoeless. I keep up a blog more or less daily, but it’s not something every client will be interested in. I go with my regular website URL, and resolve to update it right after Bouchercon.

And finally, my email address. At last count, I had four. I’ve had as many as six. Of those, I really only use two; originally one was for personal mail and one was for business, but those lines blurred a long time ago. The Gmail address has better archiving, so I use that one.
So that’s it: my business card dilemma resolved. Except I haven’t decided on a card stock yet. Or a font, or a font size…

… if you see me at Bouchercon, I may just give you a handwritten index card. I know you’ll understand.

Tomorrow's Octoberguest!: Jason Pinter
Posted by Laura Benedict at 1:05 AM

I thought you had business cards printed a while ago? Or did you just tell me you were working on them?

Decisions, decisions! I use a double last name, so my name is long. Then there's Daisy, my blogging pseudonym. What to do? I might need two sets of cards: one for blogging, one for professional events.

Business cards just lead to getting more work. My advice is to stay off that slippery slope.

It creates an air of mystery, plus you can give them to non-clients instead of doing the trite "let me put your/my number into your/my phone." Sure maybe it's not the most effective business decision, but it's unbearably cool.

I have several email accounts also. Have you ever forgotten or confused the password for all those accounts?

Laura once advised me that it would be completely appropriate for me to handwrite my name and phone on a blank business card to handout at a conference. I felt like a complete dork, but it worked out just fine!

Thanks for putting a funny spin on a very common modern dilemma!

Hope you have a great time in Baltimore.

Have I given you one of my Wile E. Coyote business cards yet--"Claire Bea: Genius"? I must have. They're pretty essential.