I knew I would adore Kelli Stanley just as soon as I heard that she'd coined the term "Roman Noir" for her first novel, NOX DORMIENDA: A Long Night for Sleeping. My daughter is a scholar of all things pertaining to ancient Rome, and she even tried to teach her eccentrically-educated mother a little Latin from her Cambridge Series of college texts. (Ah, someday I'll try again!) I devoured NOX DORMIENDA just the moment Kelli made it available to me and it made the time period live for me in the most delightful ways: It was gritty, sexy, and had a great mystery. Personally, I think it should be the next Masterpiece Theater Mystery Series (Hey, Rebecca Eaton--Get this book!)--but I digress. Kelli knows a lot about noir, films, the ancients, and the SF Bay Area. Check out her website here, her blog here, and a review of the novel here. Today is her big day. Congrats, honey!

A Long, Long Time Ago in a Culture Far, Far Away

When my friend and stellar writer Laura Benedict asked me to write about why I like ancient Greece and Rome—and enough to have spent a significant portion of my life in hot, stuffy university classrooms—she came up with a few suggestions:

“Their unbridled lust? Their totally not-modern worldview? The frequent bathing?”

My fascination with strigils and bath oils aside (a strigil, by the way, was used to scrape off the oils that someone—usually an attractive slave—rubbed all over you), these are all excellent reasons to read about Rome or Greece, but none of them (except maybe the bathing) were my personal motivators.

No, what dragged me into the Classical world was mythology. I remember reading D’Aulaire’s Book of Greek Myths when I was seven, captivated by gods that acted like second graders. I mean, think about it: Zeus and Hera and Aphrodite and Ares had the universe as a playground and were just as likely to change partners as you did boyfriends. And how cool to just hit ’em with a lightning bolt if they didn’t trade peanut butter for egg salad!

When I was older, I responded on an aesthetic level. Take a look at just about any piece of classical sculpture … the entire Western world’s conception of beauty was shaped by Greece and Rome. Imagine a street filled with naked athletes who make Lance Armstrong look like the one you’d kick out of bed for spitting out olive pits. (Greek athletes did perform in the nude; unfortunately, women were also thrown over a large cliff if they were caught watching. One reason I’m a Romanist.) 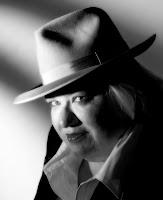 And then … the final piece fell into place when I finally took a trip to Europe, as an undergraduate more than a few moons ago. I lived in Rome for a semester … and no matter how old you are in Rome or what you actually look like, there will be men you encounter who will tell you that you are the second coming of Marilyn Monroe. I mean, what’s not to love? A little later, I lived in Florence for a year, when you could actually touch the David. No, that’s not a code word.

So all these experiences left me with an insatiable appetite for gelato and Classical culture—particularly the Roman variety. I can swear in dead languages, write love spells and analyze sexual positions in frescoes.

And if that’s not worth student debt, nothing is! ☺

by Kelli Stanley
Posted by Laura Benedict at 1:10 AM

I love the Cover! You know, I'm watching the TV show ROME. It's interesting.

Kelli - I look forward to reading your book!

I wish they'd continue the series with Augustus, or maybe pick up with Tiberius.

Thanks for stopping by!:)

Roman noir? I'm not sure I'll be able to resist! I love ancient Rome!

Rome is a culture so close to ours ... and yet, with the most bizarre differences ... I find it endlessly fascinating. :)

Glad to hear from another Rome fan! Thanks for stopping by! :)